The X Files (1993-2002, 2016) focuses on `Spooky` Fox Mulder and his skeptic partner, Dana Scully, and their mission to discover the truth... whatever it may be. The series has several overarching plots, but the main theme that runs through The X Files is the mysteries involving extraterrestrial life and the government conspiracies surrounding it. There are also Monster of the Week episodes, standalone stories that have nothing to do with the mythology of The X Files. The X-Files was considered groundbreaking in its time and has solidified its spot in pop culture with its memorable episodes, shocking plots, and clever dialogue. It served as inspiration for other sci-fi shows such as Fringe, Gravity Falls, and Lost. In addition to airing 202 episodes, The X-Files has spawned two movies and a 6 episode tenth season released in 2016. In all, it is a cultural staple and a really fun, if not `spooky`, program to watch. 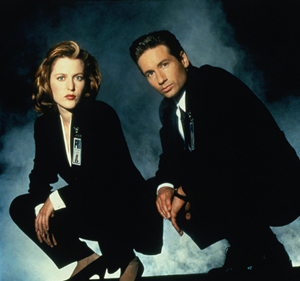 More questions about The X-Files? Try here or e-mail me.